Fact Check: USDA got it wrong with Nigeria’s, other countries’ rice imports

The United States Department of Agriculture (USDA) report which asserted that Nigeria will be the second-largest importer of rice in 2019 has been found to be grossly inaccurate, according to BusinessDay’s analysis of export data involving over 150 countries. Findings show that not only did the USDA make inaccurate assertions in its estimation of Nigeria’s rice imports; it also got it wrong with several other countries’.

The analysis is based on exports data from Thailand and India, which both account for nearly half of global rice exports. India’s 2017-18 non-basmati rice exports stood at 8,633,237 metric tonnes, while basmati rice export is put at 4,051,896 according to data from the website of All India Rice Exporters Association (AIREA). The data was further denoted to have been sourced from India’s Directorate General of Commercial Intelligence and Statistics (DGCIS).

On the other hand, data on the website of the Thailand Rice Exporters Association showed that 11,674,331 metric tonnes of rice was exported to 185 countries in 2017, and as at September 2018, exports across the world stood at 8,121,579 metric tonnes. 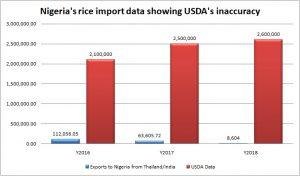 For instance, at the end of 2017, exports to Nigeria from both countries were cumulatively 63,605.72 metric tonnes, whereas the USDA claims Nigeria imported 2.5 million metric tonnes in its October 2018 report titled, “Grain: World Markets and Trade.” The difference of 2.43 million metric tonnes simply cannot be accounted for, especially not by the USDA whose data gathering process is unknown. Emails seeking clarification on data sources, sent to the press unit of USDA, as well as three personnel: Rachel Trego, Nicole Podesta, and Andrew Sowell were not replied at the time of publication.

Since 2015, rice importation through the borders has been banned in Nigeria, and while it remains permissible through the ports in the spirit of world trade, it attracts an import duty of 70 percent. This has effectively eroded the motivation for those who were erstwhile rice importers; the impact of this is reflected in the constantly declining volume of rice exported to the country. Rice coming through the land  borders is smuggled; illegally brought in for consumption, which in reality augments inadequate local production. However, no data exists anywhere capturing this volume, much less the unsubstantiated claims by the USDA.

However, while the USDA has ranked Nigeria high on rice importation, and projects it to be the second-largest importer by 2019, going by 2018 exports data, Nigeria with 5,161 metric tonnes of rice ranks 78th on Thailand exports to 185 countries. Furthermore, with 3,443 metric tonnes, Nigeria ranks 68th in India’s exports to 159 countries.

Other flaws and implications for Nigeria

Nigeria’s neighbour, Benin Republic, remains the highest importer of rice from Thailand, not only in West Africa, but the world with 1,144,001 metric tonnes already exported there as at September 2018. Benin imported 1,814,014 metric tonnes from Thailand in 2017 and 1,427,098 metric tonnes in 2016. The volume of rice exported to Benin has continued to increase, even though Nigeria’s imports have been decreasing.

A simple addition of the exports from Thailand and India alone shows that 2.05 million metric tonnes of rice were exported to Benin in 2016, against 450,000 metric tonnes the USDA claims. The USDA figure only represents 21 percent of what Benin imported from just Thailand and India; its total imports understated by at least 79 percent.

Also, whereas exports to Benin in 2017 was at least 2.51 million metric tonnes from India and Thailand alone, the USDA stated the country had a total import of 525,000 metric tonnes.

However, from just two countries; India and Thailand alone, 797,268.75 metric tonnes of rice were exported to Cameroon in 2017, which is almost 200,000 tonnes more than the figure indicated for the country by USDA. A similar discrepancy exists in the 2016 estimate, and even though the figure may look marginal, the fact that exports from only two countries far exceed USDA’s total import data leaves much to be desired.

Cameroon’s estimates may appear passable, but that of Benin Republic, and especially Nigeria suggest a highly distorted data released to the international community by the USDA.

The potential damage of such misleading data for Nigeria is enormous considering that in the last three years, there have been multi-million dollar investments as the country which aims for self-sufficiency in rice production. Even though the local production of rice is yet to attain a level where it is abundantly available, inaccurate information suggesting the country will throw its ports open to a volume of ‘legal’ imports which has not been seen in over five years, is capable of discouraging potential investors.

In the last three decades when Nigeria suddenly relied on massive importation of rice, many erstwhile farmers abandoned their farms, as their production could not make any realistic market. In addition, those who had grown businesses around milling rice paddy were affected.

Akai Egwuonwu, CEO, Anambra Rice Limited had told BusinessDay during a visit to his mill in Amichi, Anambra state that, after the mill commenced operation in 2008, it was shut down after a year (in 2009) till 2012 due to “excess importation of foreign rice that we cannot compete against.”

The report by the USDA would only have brought back such scary memories to local producers such as Egwuonwu , who are only just getting the courage to go back to production.

2019: Boroffice warns Nigerians not to allow PDP return to power